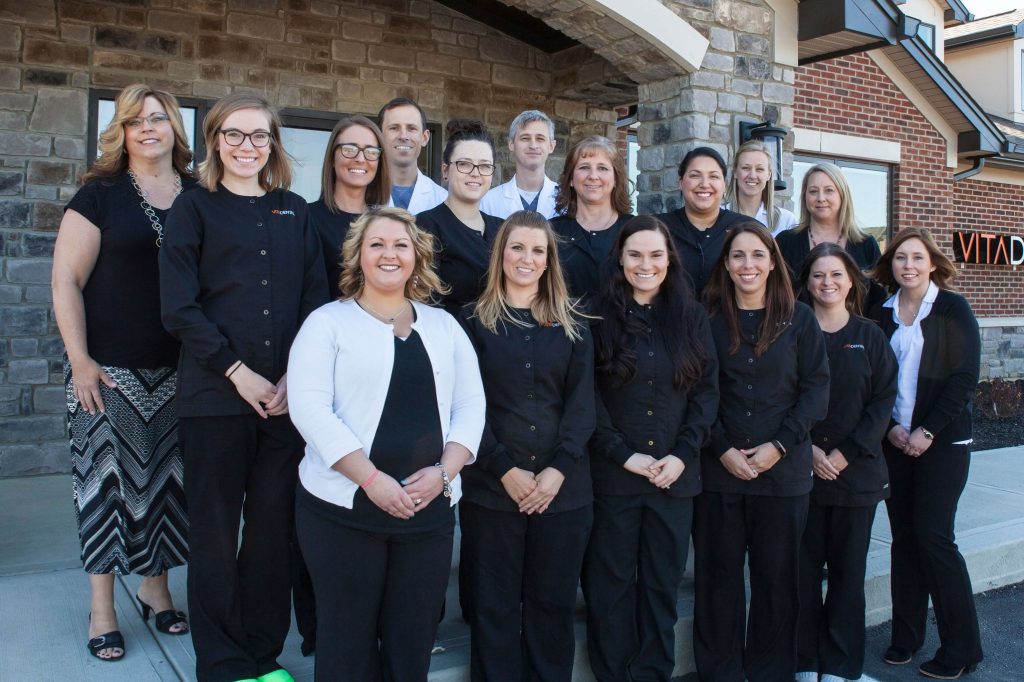 In 2015, Drs. Shaftel and Jordan were bestowed the Fellowship Award by the Academy of General Dentistry which is the most recognized distinction in dentistry and a symbol of excellence in the profession. This award is presented to dentists who continue to provide the highest quality dental care by remaining current on the latest diagnoses, procedures and technological advancements in their profession. As Fellowship Award recipients, Drs. Shaftel and Jordan join only 4% of the nation’s dentists and specialists in receiving this honor. Vita Dental is now the only dental practice in Ohio to have two Fellowship awardees practicing together.

Dr. Andrew Jordan attended Xavier University where he earned his degree in Biology. Upon graduation, he attended The Ohio State University College of Dentistry, where he was the only dentist in his class to complete the demanding program for IV conscious sedation. During his fourth year, Dr. Jordan spent a month at the Medical College of Virginia on an oral surgery externship where he gained further experience in the extraction of difficult teeth as well as the placement and restoration of dental implants. As a result of this enhanced experience, Dr.Jordan was awarded the Pre-Doctoral Achievement Award by the International Congress of Oral Implantologists. Most recently, Dr. Jordan earned the honored distinction of being named a Fellow in the American Academy of General Dentistry. In May 2016 Dr. Jordan earned the honor of being named as one of the nation’s Top 40 Dentists Under 40 by Incisal Edge magazine. He was nominated and selected by a group of industry experts across the country and then vetted by an independent panel of dentists and specialists.

Outside the office, Dr. Jordan is an avid outdoorsman. He enjoys camping, hiking, skiing, golfing, tennis and marathon running, having participated in numerous events including the world-renowned Boston Marathon. Dr. Jordan lives in Cincinnati with his wife, Liz, and their two sons.

Dr. Aaron Shaftel received his Bachelor of Science and Doctorate of Dental Surgery degrees from The Ohio State University. After graduating, Dr. Shaftel sought expanded education in more complex dental procedures and was accepted into the University Hospital AEGD Residency Program. Upon completion of his residency, Dr. Shaftel entered private practice. He has pursued numerous continuing education hours in the subﬁeld of dental sleep medicine and has earned the distinct honor of being named a Fellow in the Academy of General Dentistry. In May 2016 Dr. Shaftel earned the honor of being named as one of the nation’s Top 40 Dentists Under 40 by Incisal Edge magazine. He was nominated and selected by a group of industry experts across the country and then vetted by an independent panel of dentists and specialists. Dr. Shaftel is a member of The American Dental Association, The Ohio Dental Association, The Cincinnati Dental Society, The American Academy of Dental Sleep Medicine, The Seattle Study Club and The Academy of General Dentistry.

Dr. Shaftel is married to his wife, Jennifer, and together they have two sons and a rescue dog. In his spare time Dr. Shaftel has a passion for athletics, particularly Ohio State football, and assists in coaching the Sycamore High School Men’s Lacrosse Team.

Font Resize
Contrast
Accessibility by WAH
Call Us Text Us